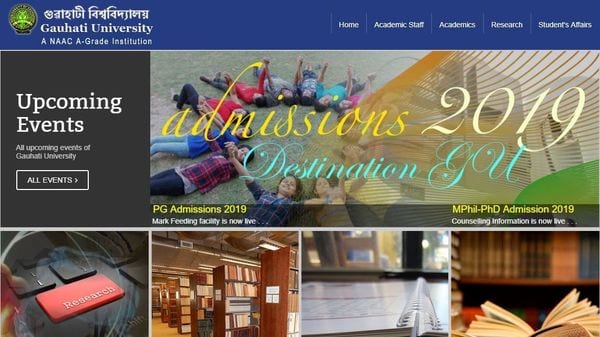 GUWAHATI : The Gauhati University has jeopardised the career prospects of nearly 74,000 students and collected ₹39 crore as enrolment fees from them by offering 21 unapproved courses through its distance learning centre for seven years, the Comptroller and Auditor General of India (CAG) has said in a report

The findings of the CAG, tabled during the ongoing Winter Session of the Assam Assembly, also says that the oldest university of the northeast had submitted multiple false affidavits to the UGC, assuring the commission that it will not start any new distance course without approval.

The CAG said that the Indira Gandhi National Open University (IGNOU), with approval of the Distance Education Council (DEC), had recognised the Institute of Distance and Open Learning (IDOL) of the Gauhati University (GU) in August 2010 for offering eight courses for three years from 2010-11.

“It was specifically instructed that IDOL, GU shall not offer any other course through distance mode other than the eight courses,” the report said, adding that later the approval was extended by the University Grants Commission (UGC) for five more years from 2013-14 to 2017-18.

The recognition was offered based on recommendations of the joint committee comprising the UGC, DEC and the All India Council for Technical Education (AICTE), it said.

“Audit observed that IDOL, GU had offered 21 unapproved courses beyond the approved eight courses through ODL (open and distance learning) mode during the year 2010-11 to 2016-17,” the CAG said.

It pointed out that the DEC and the IGNOU had clearly stated in July 2013 that courses offered by the GU through distance mode other than the eight approved courses were not recognised by the DEC and such degrees were not valid for jobs in central government services.

It said there was no admission in MSc-Mathematics and PGD-Insurance Management.

The CAG found the GU had submitted affidavits to the UGC “from time to time” assuring the commission that it will not start any new distance education programme “without prior approval of UGC”, and in anticipation of recognition of such courses.

“As such, the GU submitted false affidavits for getting an extension of the recognition of IDOL,” it said.

On being questioned, GU replied in October 2017 and December 2018 that the unapproved courses were offered in anticipation of approval, but they were discontinued from the academic year 2017, the Auditor General said in the report.

“The reply was not tenable because the courses were offered without the approval of UGC and AICTE,” the report said.

On being enquired by the audit, the UGC said in February 2018 that no university can offer programmes through distance mode without obtaining prior and specific approval from the commission, it said.

“Moreover, false affidavit submitted by the GU indicated that the university had not even approached for such approval,” the report stressed.

The CAG said that the matter was reported to the government in August 2018, but no reply has come yet.

“The GU was offering unapproved courses risking the career prospects of the students as degrees under such courses were not valid for jobs in central government services,” it added.